#Going, Going, Inverted! - Yield Curve inversions are typically a leading indicator for a recession - Historic analysis on inversions for specific yields since 1990 - Yield Curve over 5 different time frames since the start of 2018 - Takeaway from recent inversions

#Yield Curve Inversion I’ve always followed bank stocks ever since I first began investing almost six years ago. Once I learned the 10-year and 2-year treasury spread was a profit driver for the big banks, I started to track the daily fluctuations. These two interest rates are part of the larger yield curve that generally trends higher along the x-axis of a graph, while an “inverted” curve trends lower along the x-axis. The yield curve is widely spoken about so I will not get into too much detail but due to the inversion that first occurred earlier this month (December 3rd 2018), it is once again very popular in mainstream media. I’ve had this code that I wrote, posted and updated to github a few months back, and I use daily to view and analyze the daily movements. I’ve decided to make a quick post to visualize the yield curve over five different time frames since the start of 2018 and to look at how many times and when specific yields inverted.

#Why it matters - Quick Summary The yield curve matters because it can be a sentiment driver on the overall economy to many. Investors view any inversions in the yield curve as a sign that the economy may be heading into a recession. This is because an inversion happens when a shorter-term treasury note demands more yield than a longer-term note. You usually demand more for longer-term lending since you are incurring greater opportunity costs of the longer repayment schedules. Once lenders demand more interest for shorter-term notes, this can be a sign that they are not as confident in short-term notes due to a possible economic slowdown. Most investors want to be the first out the door in most companies if a economic slowdown was to actually come.

#Getting our Data I am using a package called “ustyc” that web scrapes US treasury yield curve data from the US Treasury web site. I can load in 1990 to present time quickly using a mapping function such as map(yr, getYieldCurve) %>% map(2) %>% do.call("rbind", .) but it takes a bit of time to retrieve then convert all the data to its appropriate structures. For this reason, I save the historical data frame as a csv file and load it in to update when needed. This makes it much quicker to load the data rather than running the function to retrieve data from 1990 to 2018.

Once its loaded, I can begin data manipulation to gather the appropriate yields to further analyze. Let us first add a column of the ten/two year spread since I would like to see this daily. Once we do this, our data set dimensions are 7244, 10. That is over 94,000 observations that we have loaded in. Then, lets look at the YTD graph and historical of the 10/2-year spread to see how if there is any interesting trends. 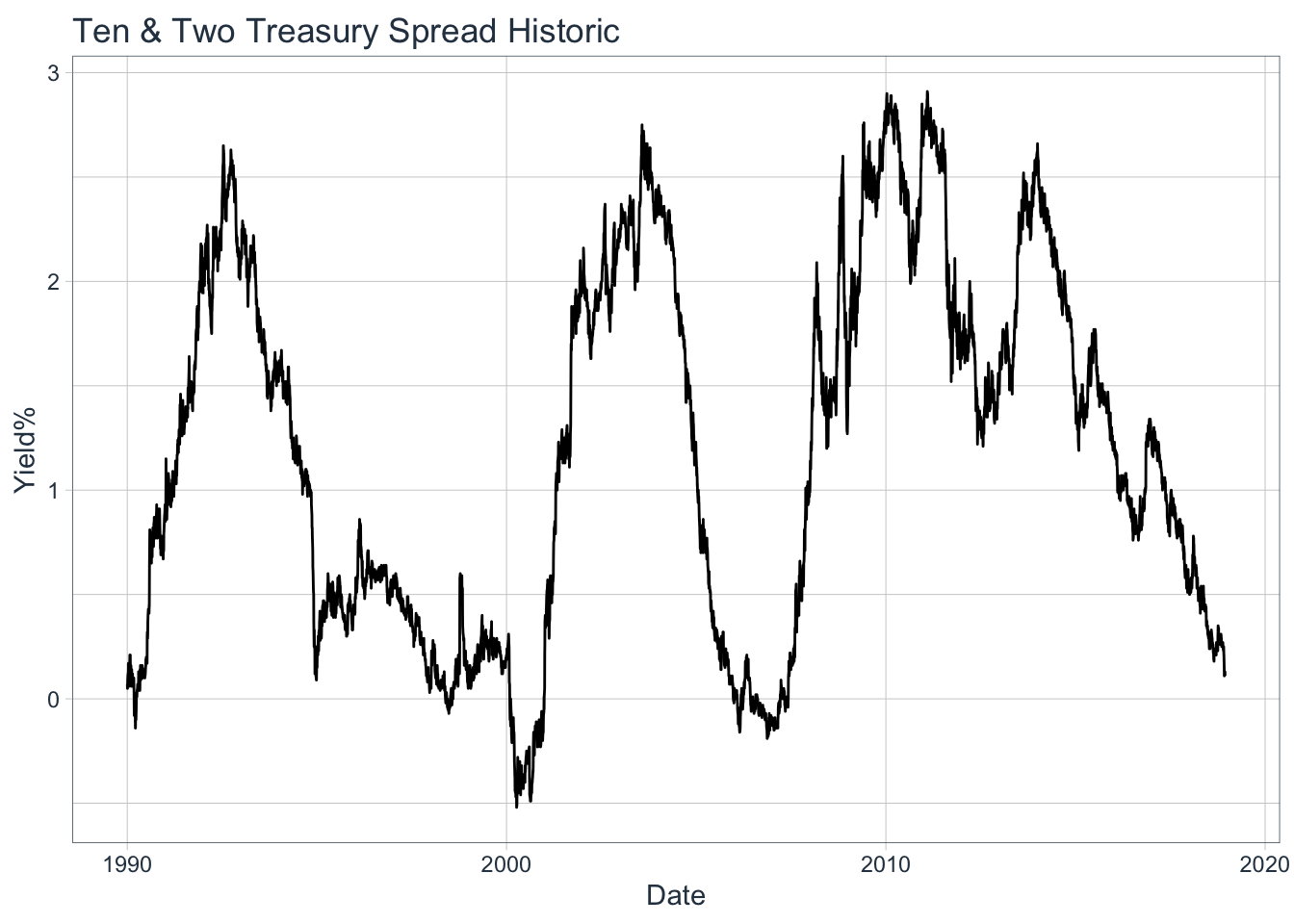 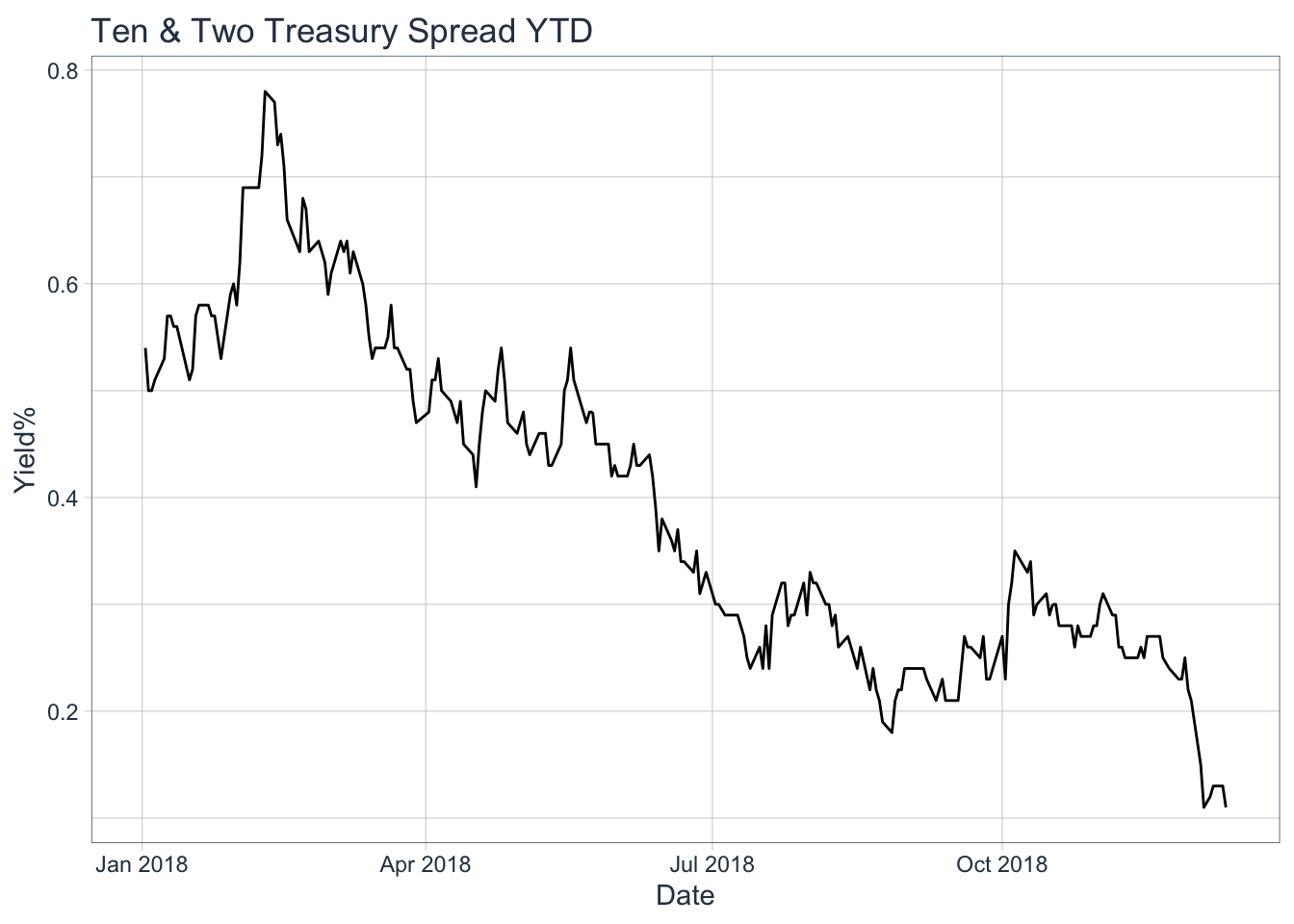 #Occurences that seperate pair of yields inverted Let us make a function that will filter through each year-yields (2-year,3-year,5-year,7-year,etc..), subset if it inverts, group by year-month, count the number of times that it inverted, and then plot it. Let us also include what I would classify as a “Across-the-board” true inversion, that is the 2-year yield greater than the 10-year which is greater than the 30-year yield (2yr > 10yr > 30yr). I would like to analyze the number of times each pair has inverted since 1990, why the inversion happened, when it happened, and how long it took after the first inversion to trigger a bear market.

#Yield curve - YTD changes Now, let us view the way the yield curve has changed since the start of 2018. Maybe this can paint a better picture by showing us the momentum in which the yield curve has been inverting. We will take 5 different time frames to plot our yield curve by using the seq and floor functions and setting the number of periods to 5. First, we need to convert our data frame from “wide” format to “long” format. This means we convert all of our columns into their own rows with corresponding value’s. This will take our dimensions of the data frame from 7244, 10 to 56011, 3 with dates, maturities, and rates as the columns. This will allow us to index by our generated sequence dates for each yield on the yield curve. Once we index by our sequence dates, we can then plot away to view YTD changes in our yield curve. 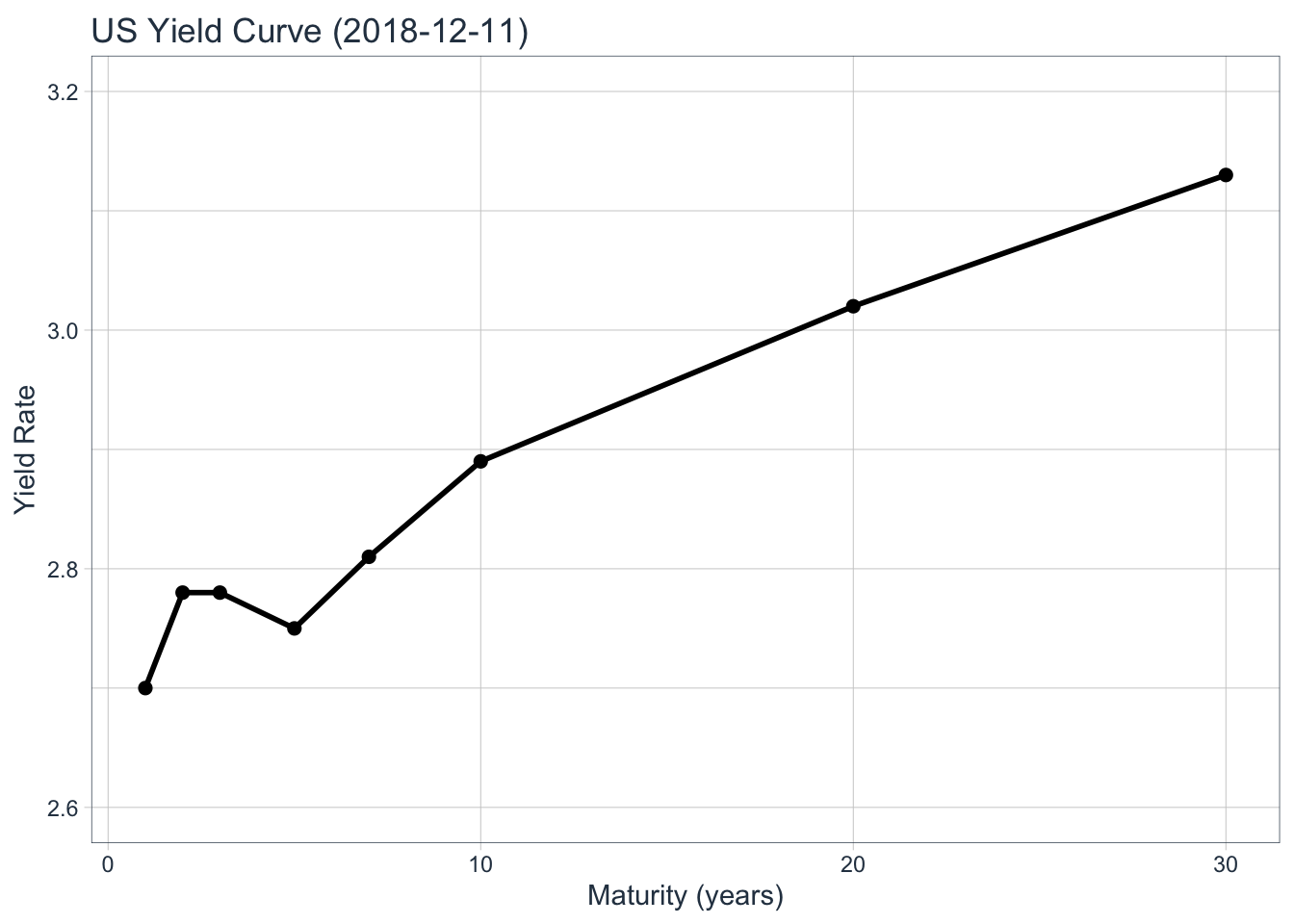 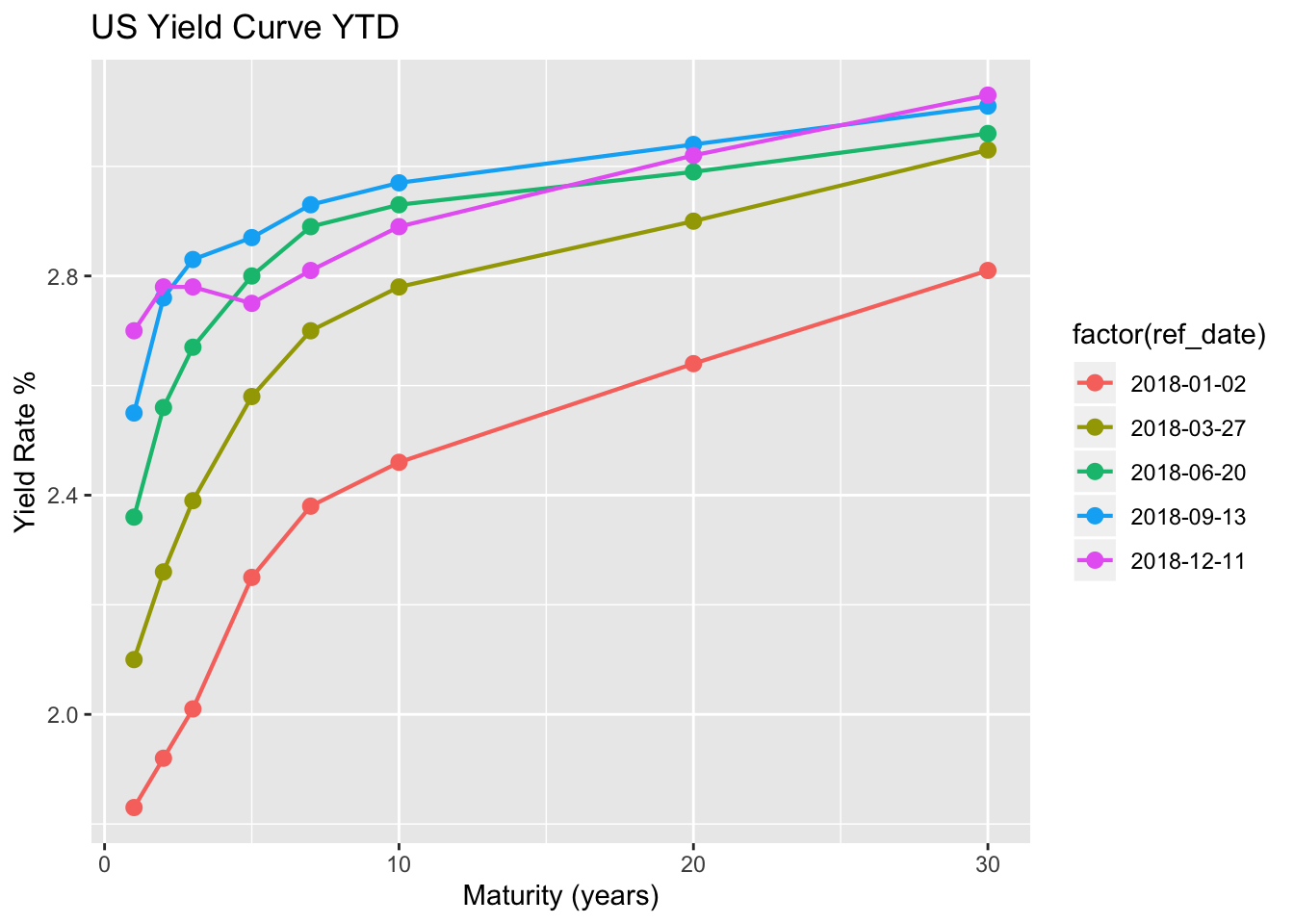 #What can we takeaway from this? Most of the inversions happened in the years of 1990, 2000, and 2006-2007. The post savings and loan crisis in 1990, the dot com bubble in 2000, and the financial crisis of 2007 (right now we are dealing with US/China trade issues, high wage growth that the FED views as inflationary, etc). All three time frames were during recessions but did they all result in a bear market (defined as a decline of 20%)? In theory, the answer is no. The only 20%+ market declines during these three year periods were in 2000 and 2007. Although, if we analyze a little closer we can see the answer should be YES! If we were to classify a Bear market as a decline of +19.9%, only 10 basis under the current 20% classification, then yes; all three year periods resulted in a Bear market (July-October/1990 incurred 19.92% loss).

If we were to use the “Across-the-board” inversion as an indicator, then the Bear market began 7 months after the inversions in 1990, 1 month after the first inversion in 2000, and 19 months after the 2006 inversions. As of 12-11-2018, the 2/10-year spread closed at 11 Basis Points, a -15.38 % change from yesterday and the 10-year/30-year closed at 24 Basis Points, a -14.29 % change from yesterday. What this tells me is that although we see some slight inversions on the short-end of the curve, which as we saw earlier occurs more often than the long-end, but the “Across-the-board” inversion has yet to happen. Even if this true inversion were to occur, then there is a possibility that we won’t see a bear market occur until a few months following the first inversion.

I do not believe we will enter a bear market due to the recent inversions in the yield curve. If you happen to be in the camp that does believe a bear market is coming, then most likely you believe that the U.S and China trade spat will only worsen from here. This could mean that either no deal is reached for a long period of time, additional tariffs, or a unfavorable deal is reached. I believe it is extremely hard to predict what two countries will settle on, when a deal is reached, or how it will affect the markets today. This is why I prefer buying into value and playing the long game rather than trying to predict how yield curve inversions and investor sentiment can affect markets short-term. All in all, I believe the FED will continue to watch closely before continuing to pump up the short end of the curve and we most likely will not see a lasting bear market if a true inversion were play out. 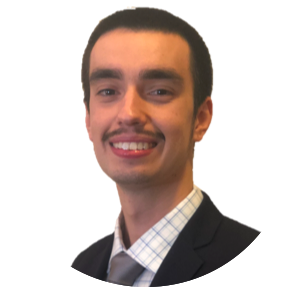 Aug 8, 2019
HTTPS to Secure Your RStudio + Shiny App Work Environment Click any link in list below to jump to topic Creating a Friendly URL Route 53 to Host Domain and Create Subdomains AWS Certificate Manager for SSL keys AWS Elastic Load Balancers: HTTPS Redirection Installing Nginx & Creating Configuration Files I wanted to create this post as an addition to my previous post Running R on AWS EC2 and Logging into RStudio from Anywhere to show how to secure your AWS environment.

Running R on AWS EC2 and Logging into RStudio from Anywhere

Aug 8, 2019
Advantages of using Amazon’s EC2 service with R Short and Easy Installation Detailed, longer yet more flexible installation Logging in to your RStudio from anywhere Using RStudio’s system terminal to install MySQL Wrapping it all up In my previous post Databases in the Cloud: Amazon Relational Database , I reviewed some of the benefits Amazon Web Services has to offer. Amazon EC2 is just another great service offered by Amazon.

Jul 7, 2019
Amazon Web Services RDS with MySQL & MySQL Workbench What is Amazon RDS How to create a MySQL RDS Connecting to your RDS: Terminal + MySQL Workbench Importing local database into new RDS If you had a chance to read my post Using MySQL with R, you’ll see that I like to use MySQL to store larger datasets for open-source projects. I found myself with access issues when trying to use MySQL as the database for a shiny app that I was looking to deploy.

May 5, 2019
Using MySQL with R Benefits of a Relational Database Connecting to MySQL and reading + writing data from R Simple analysis using the tables from MySQL If you’re an R programmer, then you’ve probably crashed your R session a few times when trying to read datasets of over 2GB+. It can get a little frustrating when all you want to do is harness the true power behind R through building statistical models on these large datasets, and your session crashes with a window stating “R SESSION ABORTED”.

Apr 4, 2019
Conference Call Text Mining and Sentiment Analysis Executives are very careful with the language they use during a conference call Using sentiment scores to validate future / long-term goals Checking for negation words that can affect score Key takeaways from this analysis Do you ever notice when our president sends out a tweet and the markets spike/drop almost instantly, or within seconds of news going public, millions of shares are being traded based off what was said or done?

Apr 4, 2019
#AlpacaforR What is Alpaca and AlpacaforR Some Example Functions Implementing the Earnings Strategy Some Bonus Example Functions - Live Account Users Learn more about Alpaca and AlpacaforR Github After writing my recent post Scaling a Simple Earnings Strategy to the NASDAQ Exchange, I started to research how I could implement that earnings strategy into a live brokerage account directly from R. Most of us have heard of Quantopian or other backtesting services, but things can get complicated quickly once you search for a way to implement a live strategy using R.

Scaling a Simple Earnings Strategy to the NASDAQ Exchange

Mar 3, 2019
#Pure Earnings Play Getting the data and writing the function Top sectors and stocks from results Beautiful plots to visualize the results Quick review How to improve the simple strategy You often hear two things when watching or reading financial news. One is earnings season, and another is quantitative trading. Most people prefer to manage their own money and pick the companies their most familiar with when making trading decisions.

Mar 3, 2019
IPO Estimate & Review Taking a look at LYFT financials for the first time Review of Dropbox IPO and stock performance Can the slow IPO market get a lift from LYFT? Every year, the stock market generates millionaire/billionaires daily through initial public offering or IPO. $46.8 Billion flooded the IPO markets last year, with 191 companies having their market debuts in 2018 beating 2017 by 31.